ALES SHIQUY…..MORE THAN JUST A PAINT 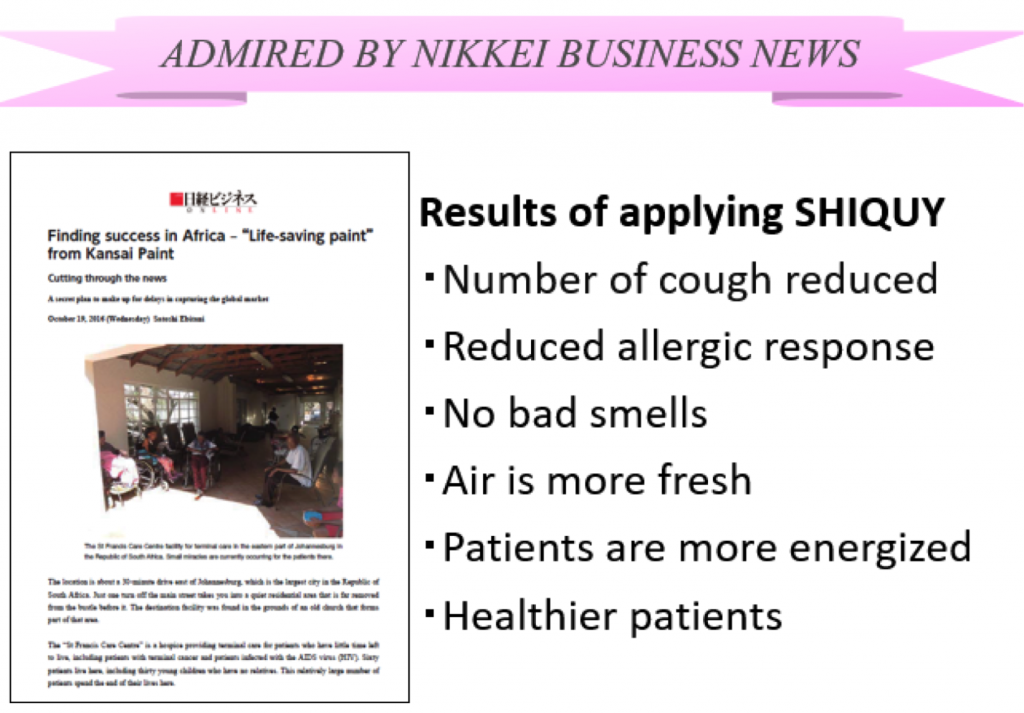 Cutting through the news
A secret plan to make up for delays in capturing the global market
October 19, 2016 (Wednesday) Satoshi Ebitani 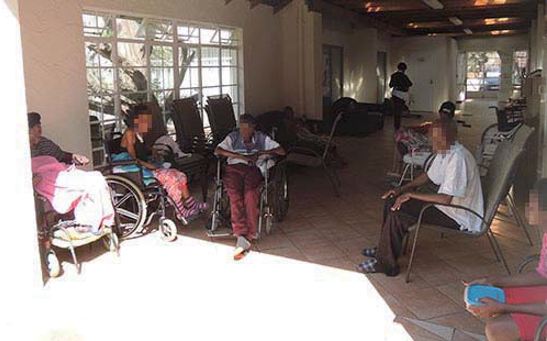 The St Francis Care Centre facility for terminal care in the eastern part of Johannesburg in
the Republic of South Africa. Small miracles are currently occurring for the patients there.

The location is about a 30-minute drive east of Johannesburg, which is the largest city in the Republic of South Africa.
Just one turn off the main street takes you into a quiet residential area that is far removed from the bustle before it.
The destination facility was found in the grounds of an old church that forms part of that area.

The “St Francis Care Centre” is a hospice providing terminal care for patients who have little time left
to live, including patients with terminal cancer and patients infected with the AIDS virus (HIV).
Sixtypatients live here, including thirty young children who have no relatives.
This relatively large number of patients spend the end of their lives here.

A small “miracle” is currently occurring at that facility.

Michelle Hamere (pseudonym, 18 years old) is a woman who entered the hospice in February this year.
At the time, she was already infected with HIV and, although she was not yet showing symptoms,
her immunity was in continuous decline.
At the time of her hospitalization, she was about 130 cm tall and weighed 31 kg.
She was clearly short for her age and she was continuously coughing.

Normal patients would continue to weaken from that point until they eventually develop the disease and die.
However, Ms. Hamere’s case did not fit the normal pattern.
After starting her life at the hospice, her physical condition improved dramatically.
The hospice matron Winnie Dlamini said that she was surprised as “The state of her health improved each day, her complexion got better and her appetite returned.” Eight months after entering the hospice, her weight had increased to 52 kg and her persistent cough had also almost disappeared.

The reason for the recovery was primarily the effects of the appropriate treatment provided by the nursing staff, but her nurse (Ms. Dlamini) told me that “There is another reason in addition to the treatment.”
She then pointed to the walls in the hospice. 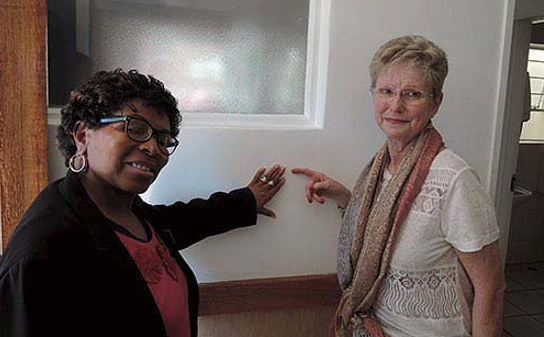 The inside of the hospice has been painted with a special paint that inactivates viruses.
The representative of the hospice Cynthia Dicks (right) and the matron Winnie Dlamini (left)

Actually, the inside of the hospice has been painted with a special paint.
Cynthia Dicks, the representative of the hospice, told me that “The conditions of many patients have improved since the paint was applied.”

The special paint contains a slaked lime ingredient that is used in Shikkui plaster in Japan.
When it is applied, innumerable fine pores are formed on its surface.
When viruses are adsorbed in them, the highly alkaline state inside the pores inactivates the viruses.
Bacteria, odor components and molds are also trapped inside the pores with the same mechanism and are eventually killed.
In other words, the number of bacteria and viruses in rooms that have been painted with the special paint can be dramatically reduced from the number in normal rooms.

AIDS patients have reduced immunity and there is a risk of developing disease from viruses and molds that are normally harmless to people.
For these patients, simply being in an environment that is nearly germ free can have a life-lengthening effect. 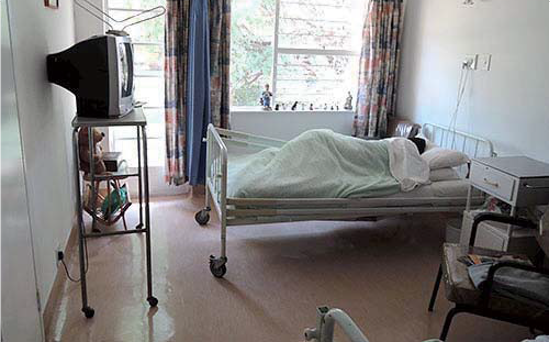 This special paint has dramatically improved the lives of patients infected with HIV and saved lives that may well have been lost.
It was developed by the major paint company Kansai Paint. It was launched in Japan in 2008 under the name “Ales SHIQUY.”
It incorporates the functions of slaked lime, which has long been used in Japan as a natural material, and is being developed as a paint with high added value for housing and offices.
Once it has been applied, the effect continues for seven to eight years.
It is also being used in applications such as luxury hotels and on the inside of the carriages of luxury trains.

Initially, Kansai Paint considered the appealing points of SHIQUY paint to be its deodorizing and mold suppression effects.
However, in further research, it was discovered that the paint has even greater efficacy.
To verify this scientifically, in 2015, the company worked in cooperation with the Nagasaki University Institute of Tropical Medicine on multiple experiments investigating its effect on viruses and bacteria.

The conclusions drawn greatly exceeded the expectations of Kansai Paint.
In addition to HIV, it was found that there was also an effect on the Ebola virus, the avian infl uenza virus and others.
The results were even exhibited at the Annual Meeting of the Japanese Society for Virology in November last year.

In response to the results of the verification with Nagasaki University,
Kansai Paint is currently considering the development of a new sales channel for the SHIQUY paint – in the emerging nations such as those in Africa.
Yu Akaki, an executive director of Kansai Paint, has said that they are making proposals to government related and other personnel regarding the use of the paint as a preventative measure for infectious diseases that are a social problem, such as HIV and the Ebola virus.

The results obtained at the hospice described at the beginning of this article were a great boost to this plan.

A request from the Embassy of Japan in South Africa

“Could you paint a hospice with your SHIQUY paint?”

This request arrived at Kansai Paint in 2015.
It was a request from the Embassy of Japan in South Africa.
Mr. Akaki of Kansai Paint had previously explained the Shikkui paint to Ambassador Shigeyuki Hiroki of the Embassy.
Mr. Akaki looks back on this and says that “He expressed great interest in the effects of the paint.”
Later on, it had been decided that the Embassy of Japan in South Africa would use ODA (Official Development Assistance) to support the renovation of the St Francis Care Centre, which it had long had a relationship with.
This is where the idea of applying the SHIQUY paint arose.

For Kansai Paint, this was the best opportunity that they could have wished for to investigate the actual effects.
The company soon responded to the request and Kansai Paint employees even went to the hospice whilst it was being painted. 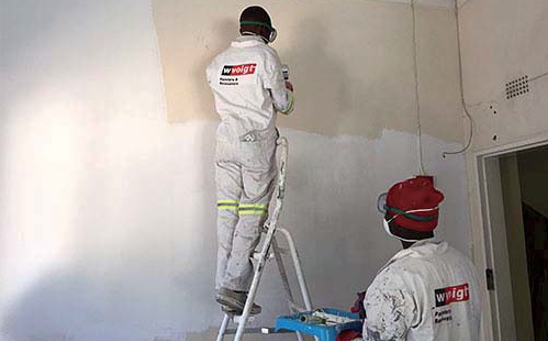 The work to apply the SHIQUY paint inside the hospice

This reporter also visited the hospice and walked around inside.
The rooms where the paint had been applied were all equally cool, possibly because the paint was absorbing humidity.
There was little of the characteristic gloomy feeling of a hospice and the impression gained was actually of cleanliness and brightness.
The scene of the patients basking in the sunlight and resting with smiles on their faces left a strong impression on me.

Many of the nurses who were assisting the patients also said that they had felt the effects of the paint.
They all said that there is a visible improvement in the condition of the patients.
They also say that the atmosphere in the hospice has become much brighter.

Originally, Kansai Paint has been strong in the business of coating materials for automobiles,
but has had little presence in the business of building coating materials for consumers.
They have been reinforcing their paint business for construction in Africa and various other countries around the world in an effort to expand their market overseas. (See the company research dated October 17, 2016 for details of this.)
In this sense, the SHIQUY paint has great potential as a powerful tool for expansion overseas. 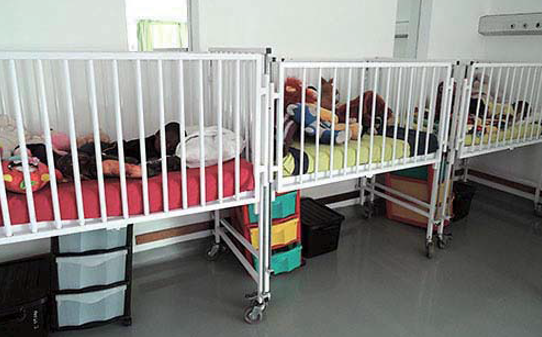 The SHIQUY paint was also applied in the children’s ward

Of course, there are issues to be solved. First of all, it is necessary to more precisely verify the efficacy of the SHIQUY paint.
The testimony of the nurses is certainly useful, but it is currently no more than subjective evidence.
The scientific basis for it has not yet been verified,
so it will be necessary from now onwards to verify the effects in cooperation with parties such as universities.

An even greater hurdle is whether or not it can be profitable to sell the product in Africa.
In addition to the supply network necessary to procure the special paint locally and the transferring of the production methods,
if we also consider other factors such as the marketing expenses required to promote the products locally, then it seems that
the costs will be quite expensive.
However, the average incomes in Africa are still low compared with those in the advanced countries, so making a profit will require a large effort.

Kansai Paint is currently cooperating with an NGO (Non-Governmental Organization) on the extension of another special paint that repels mosquitoes and the company is considering using the same methods for the SHIQUY paint.
In addition to this, there are innumerable other procedures to be followed, including to obtain endorsements from certification authorities. 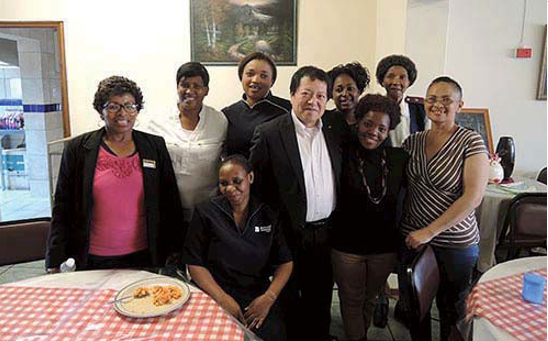 The nurses who work at the hospice all say that “the atmosphere has changed.” The person
in the middle of this photograph is Yu Akaki, the executive officer of Kansai Paint who led
this project.

The shine in the employees’ eyes has changed

President Hiroshi Ishino of Kansai Paint is estimating that it will take ten years before these projects can contribute to profits.
However, despite this, he has no intention of simply stopping the projects before they are completed.
This is because he is confident that “This will become essential business to support the next 100 years of Kansai Paint.” (President Ishino)

Furthermore, the extension of SHIQUY paint to Africa is also having the effect of raising the motivation of the employees.
In the era when the company’s core business was in coating materials for automobiles, the main customers of Kansai Paint were automobile manufacturers.
In other words, it was business for businesses and there was little opportunity for the Kansai Paint employees to experience how their work was contributing to the lives of consumers.

However, the activities in the hospice diff er from the conventional business in that it is possible for the employees to feel how the paint that they have developed themselves is directly contributing to human life.
Executive officer Akaki says that “The shine in the employees’ eyes has changed.
This has been highly beneficial in that it has raised the job satisfaction.”

It is said that the young generation known as the “Millennials” and also a relatively high proportion of capable personnel are looking for not only salary and job titles, but are also demanding some meaning in the work from the company.
As more and more people are asking themselves whether the work they are doing is useful for society, the expansion of Kansai Paint in Africa is becoming a important element providing job satisfaction for the employees.
Improvements to the SHIQUY paint are still in progress. In May this year, it became possible to apply the paint to cloth and others in addition to painting it on walls.
If this technology is used, it may be possible to apply it to things such as rescue tents, so that they can be used as simple operating theaters that are close to a germ-free state.

The gap between the major paint companies of the world and Kansai Paint is still large.
However, Kansai Paint is not giving up on the possibility of joining the top group globally and conquering the market in Africa is a goal that must be achieved for this.
The importance of the special paints such as the SHIQUY paint will no doubt continue to grow.
In this sense, the results obtained in the hospice in South Africa could quite possibly prove to be the trigger for the expansion of the company’s business in Africa.